On April 19, 1943, the Warsaw ghetto uprising began after German troops and police entered the ghetto to deport its surviving inhabitants. By May 16, 1943, the Germans had crushed the uprising and left the ghetto area in ruins. Surviving ghetto residents were deported to concentration camps or killing centers.

Even after the end of the uprising, individual Jews hiding out in the ruins of the ghetto continued to attack the patrols of the Germans and their auxiliaries.

The Warsaw ghetto uprising was the largest, symbolically most important Jewish uprising, and the first urban uprising, in German-occupied Europe. The resistance in Warsaw inspired other uprisings in ghettos (e.g., Bialystok and Minsk) and killing centers (Treblinka and Sobibor). 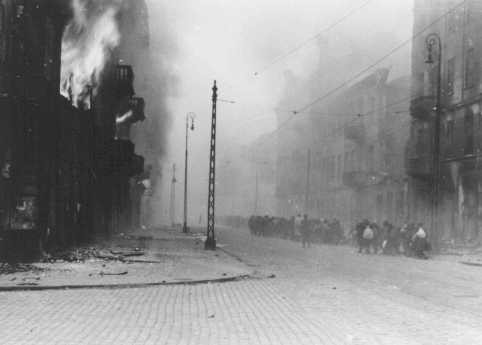 Photograph from SS General Juergen Stroop’s report showing the Warsaw ghetto after the German suppression of the ghetto uprising.